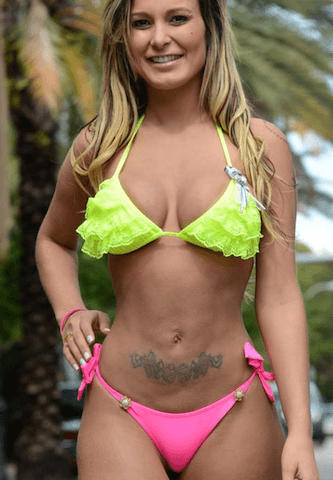 Plastic surgery is generally thought of in terms of liposuction, breast implants and attempting to defy age as one gets older. However, there is much more to plastic surgery than that. With technology growing and society constantly changing, people are continually finding new ways to change or improve their bodies even when there is nothing that needs to be changed. For 27-year-old Andressa Urach, she learned that an unnecessary cosmetic surgery would cost her much more than money. This well-known buttock model actually, and briefly, paid with her life!

Andressa Urach was once known for being the runner-up in Brazil’s renowned Miss BumBum competition in 2012. She is also known as one of the most beautiful women in her native country of Brazil. Brazil happens to be a country which prides itself on being an image driven culture. Therefore, it is customary for women in Brazil to undergo several cosmetic surgeries in their lifetimes. Andressa had already intended to have one toe on each foot removed in order to make her feet appear thinner. She also planned to have a rib removed to give her body a thinner look. Therefore, Andressa had no reservations about having a thigh filler procedure done since she had gone under the knife before. She had no idea that this procedure would literally kill her for a few moments.

Things took a drastic change for this model after the procedure. Andressa’s body began to react negatively to the chemical fillers injected in her thighs during the procedure. The injections contained two types of fillers, hydrogel and PMMA. These fillers were combined to make her butt larger and plumper. However, Andressa began noticing some discomfort from the fillers. She later discovered that the hydrogel was not absorbing in her body. The doctors had to drain 400-ml from Andressa’s legs. She later found out that the PMMA filler had stuck to the muscles in her thighs and butt and had began to rot the tissue from within.

The model underwent two unsuccessful drainage procedures and still ended up with a life threatening infection in her left thigh. At this point, Andressa feared she may lose her leg in the process. Her body went into septic shock, her organs failed and Andressa claimed she briefly died in the emergency room that day. “I’ll never forget it. Coming face to face with death, I realized that nothing else mattered,” Andressa stated in an interview. “Everything I had battled for, my beauty, my bags, my clothes, my car — I’d left all that behind. It was the moment I realized I was nothing, that we are only here on this world to save our souls.”

The doctors were able to save Andressa’s life by draining the chemical fillers from her legs. Andressa spent a month in the intensive care unit during her recovery. However, the procedure left this high profile model with gaping holes in her body which will eventually scar. “I’d give everything to turn back time and do things differently. Nobody knows what I’m going through, I’m in constant agony. I’m still in the middle of a horrible nightmare. All this I’m going through is punishment for my stupid vanity.”

The doctors warned Andressa and her mother that healing would be slow and that it would be very easy for a patient suffering from sepsis to develop a new infection. Confined to a wheelchair, Andressa spoke to all the women she hopes will head her warning. With damaged skin, this survivor of a botched cosmetic procedure learned a horrific lesson which she intends to turn into something positive. “Now, thanks to God, I’m able to tell other women that vanity isn’t everything,” she told the ‘Mail Online.’ “If all this serves as an example to warn others of the dangers of these things, to save other women from a premature death, then that was the reason I had to go through it.”As the saying goes, “Beauty is only skin deep” and beauty certainly isn’t everything. Anyone thinking about undergoing a cosmetic surgery procedure needs to decide if the outcome is worth any potential risks. Every surgery has possible risks and even the most successful procedures can have devastating outcomes. It’s vital for patients to do research and learn about all possible risks in advance.